It might seem unlikely that a highly qualified Nano and Environmental Engineer would be cooking Chinese dumplings at all, but Chananda is, and hers might well be the best in town – at least customers of Tuayfuu, her family’s  restaurant, say they are!  During the week, Chananda is a valued member of the Climate Change & IP Practice Group in Rouse’s Bangkok office, but at weekends you’ll find her working away happily in her parents’ restaurant, sometimes in the kitchen, sometimes front of house.  She moves very easily between the two worlds.

Moving easily between professional and restaurant life seems to be a family thing. Chananda’s father originally worked as a technician in a Thai telecommunications company and her mother taught Thai in middle school, but as soon as they retired they decided to branch out and open a restaurant.  It has been very successful and now they work there during the week and at weekends Chananda and her older brother, a Mechanical Engineer with the Thai Health Department, help out. 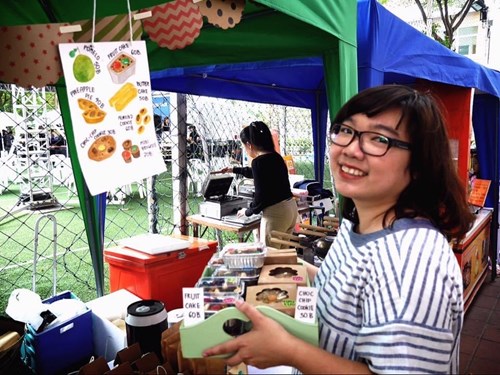 When Chananda was growing up in Bangkok, however, the focus was very much on education.  Her mother in particular, perhaps because she was a teacher, perhaps because there were many doctors in her family, was convinced of the importance of education and encouraged both her children to study.  At school, Chananda was good at both languages and science.  She was particularly drawn to biology and her mother wanted her to be a doctor.  She grew up just assuming she would be, but when the time came to go to University, there were very few opportunities available to study Medicine so she opted for Nano Engineering instead.  It seemed an obvious choice as the course included biology, and interesting work was being done in the field of Nano-medicine.

Chananda had, however, as a child already begun to take an interest in environmental matters.  She remembers being bothered by pictures of rubbish building up in the city and thinking something must be able to be done about it.   It was something that stayed with her and by the time she graduated in Nano Engineering, she was beginning to think that perhaps there was something she could do.  At an Open House in Thailand, where universities from all over the world come to promote their courses, she learned of the two-year International Energy Science Masters program being offered by the Kyoto University in Japan.  It was exactly what she was looking for.  She applied for and obtained a scholarship and spent the next two years studying in Kyoto.  It was a marvellous time and not only because she was learning about Energy Science; she was also being exposed to different cultures and meeting people from all over the world.

When she returned to Thailand, Chananda worked as a Technical Officer on a two-year project being undertaken by the Thailand Greenhouse Gas Management Organization, an autonomous governmental organization established under the Ministry of Natural Resources and Environment. The project was funded by the World Bank and aimed at reducing greenhouse gas emissions in Thailand.  Chananda was responsible for the Low Carbon City Scheme, which assisted 25 cities in Thailand to estimate their carbon footprint and introduce mitigation measures.

When the project came to an end, Chananda happened to see that Rouse was advertising for a technical translator and, as she was already doing some freelance translating and well-qualified for the position, she decided to apply, thinking it could be interesting for a while.  When she went for an interview, however, she learned about an exciting development that was occurring within Rouse - the establishment of a Climate Change and IP Practice Group – and very quickly the discussion turned from technical translation to participation in the Group.  It was an unexpected, exciting and challenging opportunity and Chananda couldn’t wait to get started.  Now she’s providing technical support in a range of matters, particularly in relation to the development, protection, commercialisation and enforcement of Environmentally Sound Technologies and Climate Change Mitigation Technologies.

Although Bangkok is one of the world’s most congested cities, it takes Chananda only about 30 or 40 minutes to the office by Sky Train.  She’s one of the lucky ones!  Still, between work in the office and days at the restaurant, life is busy.  There’s not a lot of time for very much else, but one of her favourite pastimes is reading.  She finds that over the years her reading preferences have changed – whereas once she read mostly science fiction or fantasy,  now she most enjoys non-fiction, particularly history.  At the moment she’s trying to understand the modern economic system and enjoying reading Economics: The User’s Guide, by Ha-Joon Chang.  She says it’s the perfect introduction, providing an overview of economic history and describing a wide range of economic theories.   She also enjoys travelling and usually travels once or twice a year with friends, either within Thailand, or somewhere elsewhere in Asia e.g. Japan or Korea.  She hasn’t yet been to Europe, but that’s a dream for the future.

For now, however, Chananda is happy being where she is and doing what she is doing.  She can’t believe her luck ending up at Rouse in such a challenging and exciting position, and she loves her time at the restaurant at weekends.  She says that even when her parents eventually retire, she would like to keep the restaurant going.