“Things are seldom what they seem” W.S.Gilbert

I probably shouldn’t have been surprised to discover that Hai Anh loves watching Tom Cruise in action movies like Mission Impossible; loves ballroom dancing; and is an avid follower of fashion and fan of organic cosmetics.  But I was!  I hadn’t been expecting any of that.  I knew she was polite and gracious and I knew about her professional achievements - and on the basis of that limited knowledge, had built up a picture of her in my mind.  Now I find that her polite and gracious manner belies a strong, highly principled and disciplined character - and a great sense of fun.

Hai Anh is one of those people who seem to have absorbed wisdom and strength of character in the process of growing up.  She says her father was largely responsible for that. He was an inspiring and kind-hearted person, who set very high standards, both for himself and for others.  He instilled in Hai Anh the values and principles he believed to be essential for a good life, and taught her the importance of achieving independence.  She adored him. Sadly, he died not long after she graduated from university, but his influence had already been enormous.  Hai Anh also speaks with pride of his professional achievements.  He was a highly skilled and respected naval engineer who, although sought after by foreign companies, had chosen to continue working for the General Department of Vietnam Customs, designing the high-speed patrol boats that were being used in the war against smugglers.

Hai Anh’s mother’s family was quite different, but equally interesting and influential.  Vietnam is known for its traditional hand embroidery and Hai Anh’s great uncle had been a leading exponent of the art, receiving a State Award and undertaking Government commissions for the production of works that would be presented as gifts to foreign dignitaries. Some of his work is now in the National Museum in Hanoi.  Hai Anh’s mother inherited the skill and she too is a highly regarded and highly skilled embroiderer.   Hai Anh herself seems to have inherited the skill and is a good embroiderer, but from the outset both parents wanted her to follow a different path: to have a university education and enter one of the professions.

Fortunately Hai Anh was academically inclined and her parents’ ambitions coincided with her own.  She obtained a BA in International Economics from the Foreign Trade University in Hanoi, widely recognized as one of Vietnam’s leading universities, and then worked as a Project Officer with a pioneering local company engaged in the R&D, manufacture, and commercialisation of audio/video conferencing and monitoring systems.  The work was interesting, but demanding, often requiring her to work very long hours.  And it was while she was working there that her father died and the direction of her life changed dramatically.

His death was a huge blow to the family.  Hai Anh’s younger sister was still at university and her mother, grieving over the loss of her husband, decided it was time to retire. Hai Anh realized that she would need more time to help her mother and sister, and, at her father’s funeral, an opportunity presented itself.  One of her father’s ex-employees, concerned for the family’s welfare, spoke to Hai Anh about the possibility of a career in IP, telling her it was a growth area and would enable her to earn a good salary.  He worked with a leading State-owned IP agency that was in the process of recruiting and he encouraged to take the test.  She did and she passed, but it was only when she subsequently spoke to the Agency’s director that she began to realize how interesting IP might be.

She worked there happily for four years and was head of the Trade Marks Department when the Ministry of Science & Technology was obliged to privatize the agency.  The people who ultimately acquired it had no knowledge of, or interest in, Intellectual Property, and Hai Anh knew immediately that it was time for her to move on.  She accepted an offer from Baker & McKenzie and had been working there for eight years when an opportunity to join Rouse presented itself. She was initially very reluctant to leave Bakers, and it was only after talking to people at Rouse, and seeing the very different culture and philosophy, that she began to think about it seriously.   It was really her husband, though, who finally persuaded her it was time for a change and that a move to a firm like Rouse would be challenging and exciting.   She took the plunge and has never regretted it.

She and her husband had met during Hai Anh’s first job after graduation.  He was an IT programmer and they had worked together on several projects.  Later he worked for CISCO and now runs his own IT systems and software company.   They have two children, a daughter 11, and a son eight, so life is busy. 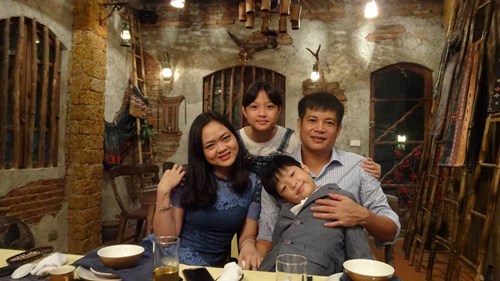 It is when Hai Anh talks about her family and the ambitions she has for her children that you begin to realize how well she learnt the lessons her father taught her - and just how principled and disciplined she is.  She says she wants to teach her children to live independently, and to discover and develop the best in themselves.   She respects their needs and hopes they will be happy and successful in whatever field they choose.  She is confident that, if they have the necessary skills, values and principles, they will be.  She says it is part of her family tradition to respect the needs of the child and tells a revealing story about her own experience.  At school, she was selected to go into a class of high achievers.  She decided she didn’t like the pressured atmosphere or the way students competed with each other, so she asked her parents to leave her where she was.   She undertook to study well and her parents, unlike most, didn’t insist.

Hai Anh manages a busy and complex life with apparent ease, achieving a balance that many would envy.  She’s able to do it, she says, partly because of the support she receives from her family and partly because, although demanding of herself and others, she doesn’t take things too seriously.  Being positive, decisive, and practical helps her both resolve difficult problems and find a way out of difficult situations.