‘Chance’ encounters in a far-from-ordinary life

Luke is Chief Executive of Rouse, currently based … mostly on a plane

In some ways, when you hear his story, it seems a miracle that Luke is as he is:  a successful business person, warm and grounded, with an easy charm.  He could well have been shipwrecked by his unconventional upbringing.  Many would have been.  Instead he seems to have been enriched by it.  The reasons for that are many, but he says that a couple of chance encounters - if anything happens by chance - really saved the day: he owes a huge debt of gratitude to Giuseppe Luca, the proprietor of Poppa’s pizzeria in Dunedin, New Zealand, who gave Luke his first real job, and to Bernadette, the young student who rented a room to him when he was at university and is now his wife.

Luke’s unconventional background was really due to his father, John Minford, who is now one of the world’s most eminent translators of Chinese classical literature into English, but was then something of a lost soul. He had graduated from Oxford, knowing he didn’t want to be an academic, but not knowing what he did want to be – only that he wanted to do something creative.  He was a talented pianist and before going to Oxford and had spent several years studying the piano in both Vienna and London.  But much as he loved it, he could see that the piano wasn’t going to enable him to make a living.  So he more or less dropped out for six or seven years, becoming what he has whimsically described as a ‘hobo’.

By this time he was married to one of London’s highly successful models and had two children, Luke and his elder sister, Emma.  While he may not have been able to make his fortune as a classical pianist, John was a talented composer and he joined a theatrical group creating and putting on musicals around England. Luke’s earliest childhood memories are of a life touring the English countryside in a caravan - perhaps it sowed the seeds for his later life living on a plane!

Tragically, Luke’s mother fell ill while on holiday in Morocco in1973.  John took her to the nearest hospital, which was in Oran, Algeria, but sadly she died there.  He buried her the following day and returned to London with Luke and Emma. That is when he decided to get serious with his Chinese.  After several years, by which time he had re-married, he received an offer, quite out of the blue, from a Chinese Professor at the Australian National University in Canberra.  To Luke, at the age of six, it all seemed to happen without notice.  Suddenly he found himself attending Turner Primary School in the intense heat of an Australian summer.  But, thanks in large part to his sporting ability, it didn’t take him long to adapt.  Soon he was a Rugby League playing Aussie kid and, much to his father’s dismay, happily hanging out with, and being led astray by, the neighbouring Croatian Popovic boys.

Then, just as he was beginning to feel at home in Canberra, the family moved again, this time to a small farm outside Yass, an hour’s drive from Canberra. Living in the Australian outback and attending the local Yass Primary school was, as Luke describes it, “not particularly easy for a glasses-wearing English kid”, but it didn’t take him long to learn the language of trucks and tractors and he soon found himself making friends again.

The moment he learnt of the decision to leave Yass and move to China remains etched in his memory. It was at the end of a school day and he was walking out to get the bus with his friends when he saw his family sitting in the station wagon, bags packed and roped down on the roof. No one was looking happy. As Luke got into the car to find out what was going on, his father broke the news: “We’re moving to China”. And so it was on to the next stop in Luke’s journey: Tianjin! 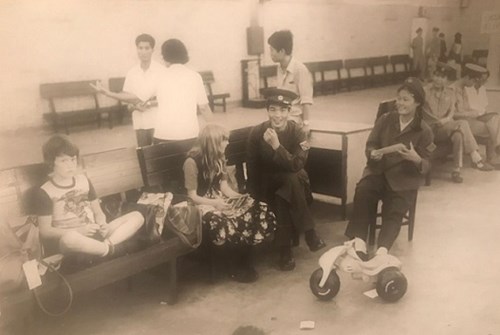 Luke and Emma waiting at the Guangzhou Train Station for the train to Beijing, 1980

The family flew to Hong Kong and stayed on Nathan Road before making the journey by train to Beijing and then on to Tianjin. Luke’s father has since described arriving in Tianjin at that time as something of a ‘baptism by fire’.  It certainly was for Luke and his sister.  There were no international schools back then and the government was extremely wary of visiting foreigners, so Emma and Luke were placed into a school for the children of elite Chinese officials. The catch was that they were put into a class with five-year olds: not only were they twice the age of their classmates, they were also twice the size, hardly fitting into the school desks.  And, of course, they didn’t speak a word of Chinese.  “It was a steep learning curve in one sense”, says Luke, “but it was also the only time I felt really good at maths”.

In general, it was a difficult time to be in Tianjin. The city had still not recovered from the devastating Tangshan earthquake, and much of the city still lay in ruins.  There very few expatriates, and life for the few there were was restricted:  1980’s China had not quite figured out how to engage with a foreign community.  After a few years, it was decided that Luke and Emma would be better off with their grandmother in England.  So John took them to Beijing train station and put them on the Trans-Siberian Railway.  The journey back to the countryside of Oxfordshire via Russia and Eastern Europe took them seven days and along the way they lost every piece of luggage they had.  But ultimately they arrived safely in England - quite an undertaking for children of 12 and 14!

Although Luke’s stay in England was short, he has fond memories of living with his grandmother in the countryside of Oxfordshire and attending the local comprehensive school, John Mason, Abingdon. Despite his desire to stay in England and pursue a career as a professional footballer (or perhaps because of it) his father, who by this time had moved to Hong Kong, thought it was time for the family to be together again.  So Luke soon found himself back in Hong Kong.

He attended the King George V School in Kowloon and was enjoying being there, when the family moved again, this time to New Zealand, where Luke was enrolled in the rugby-mad boys school of Mount Albert Grammar. He did well enough at school to get into university and decided to enrol at the University of Otago in Dunedin in the South Island, where he studied law.

It was in Dunedin that the two important ‘chance’ encounters took place, the first thanks to Luke’s football prowess.

At the time, he had no money and was struggling to pay his way through university.  One day, while kicking a football on one of the university ovals, he was approached by an Italian man called Giuseppe Luca, owner of Dunedin’s hugely successful Poppa’s pizzeria. Giuseppe’s lifelong ambition had been to see his football team, ‘Poppas Pizzas XI’, win the University league championship. Despite years of trying, the team had never finished higher than third. Giuseppe would hang around the sports grounds like a talent scout, hoping to recruit newly arrived students. Seeing Luke’s potential, he immediately asked him to join the team.  Luke said he would play, but only if he could have a job at Poppa’s and learn how to make pizza.   Giuseppe agreed and for the next few years Luke worked hard making pizzas for a living – 40-60 hours a week.  He says that job saved him.  It not only enabled him to support himself through university, but also brought some much needed structure and stability to his life.

The second encounter took place when Luke answered an advertisement for $20-a-week accommodation.  This was far cheaper than anything else on offer, and all he could afford.  It turned out to be a room no bigger than a wardrobe, with single bed and outward opening door. The young and charming landlady hadn’t expected that anyone, let alone someone like Luke, would pay $20 to live in a wardrobe but here was a man offering just that!  It was an encounter with a very happy ending:  Luke and Bernadette are now married and have two lovely daughters.

It was yet another ‘chance’ encounter that brought Luke to Rouse in 1997.  He had returned to Oxford for Christmas in 1996 and run into Elizabeth Dunn at a party. She was an old John Mason school friend now working as a lawyer at an interesting Intellectual Property firm in London called Rouse. She made it sound like a really quirky and fun place to work, Luke remembers.  “Peter Rouse would be bound to be interested in someone like you” she said.  And she was right!  Ten minutes into the subsequent interview, Peter had offered Luke a job in Hong Kong.  And the rest, as they say, is history.