The contagion of unbounded enthusiasm

Manoon is a Principal of Rouse and Thailand Country Manager.  He is based in Bangkok office and focuses on IP contentious matters and litigation

Almost everyone will tell you they have had at least one inspiring teacher or mentor, sometimes at school sometimes later in life, someone who sparked an interest, opened doors, inspired them to learn – someone whose enthusiasm was unbounded and contagious.  People often describe Manoon in that way: his enthusiasm is well known to colleagues and clients - and to anyone who spends any time with him.  And it extends way beyond his professional work – from Formula 1 racing to football, trekking to photography, and all things mechanical.

It’s hard to know where, or how, all these enthusiasms began.  Manoon grew up in a large family in Chaiyaphum Province in north-eastern Thailand, with three older brothers and one older and two younger sisters.  His father had been a policeman for ten years, and then bought a truck to start his own business, transporting goods for people in a small city.  Sadly, he and two of his sons are no longer alive, but the rest of the family are still in Chaiyaphum and a neighbouring province.  Manoon’s remaining brother is a farmer there, growing tapioca and rubber trees and very happy doing it.  Manoon loves the country and remains very close to his family, but from the outset he seemed destined for a different life. From a very early age he was fascinated by things mechanical: all his toys were cars and trucks and he liked nothing better than taking them apart and putting them back together again.  As he grew, his interest turned from toy cars to real ones and he began pestering his father to be allowed to drive the family car.  When he did finally begin driving he found he loved it and was good at it.  So it shouldn’t be surprising that when, as a teenager, he started watching Formula 1 racing on the television, he found it enormously exciting.

Formula 1 is now probably his favourite sport, which might seem surprising given that it isn’t particularly well known or popular in Thailand.  In 2002, when Toyota entered Formula 1, Manoon was an avid supporter of the Toyota team, largely because at the time he was driving a Toyota.  More recently, Toyota having left F1 in 2009, he has been following the Finnish driver Kimi Raikkonen, who drove for the Ferrari team before recently switching to Alfa Romeo.  Raikkonen appeals to Manoon because of his personality, which Manoon describes as ‘unique’, his calmness, and the fact that he is not flamboyant or arrogant.  Now, however, Manoon has a new favourite, a young Thai-British driver, Alexander Albon, who has just been promoted to the Red Bull team.  Albon is young and very promising.  If he continues to do well, Formula 1 is likely to become much more popular in Thailand - and Manoon likely to find that the currently quite modest group of Formula 1 fans has expanded dramatically.

Back in his school days, Manoon’s favourite sport was soccer – even though he managed to break his knee playing it. He says he devoted much more time and energy to soccer than he did to school work, with the almost inevitable result that when it came time to apply for university, he wasn’t able to study Mechanical Engineering, as he’d been hoping.  He turned to law instead.  As it has turned out, he couldn’t have made a better choice – even if it was by chance that he ended up in IP.  On graduation, he got a job with a local law firm and one of the first cases he worked on was an IP case.  He found he really enjoyed it and from that point on remained in IP, with local Thai law firms and Baker McKenzie’s Bangkok office.  In 2009, a colleague who had moved to Rouse contacted him to say that Rouse was looking for a Senior Associate level lawyer to handle a large patent infringement action.  By that time, Manoon had studied in America and had considerable patent dispute experience.  He thought the job might be just for him and decided to make the move.   For the next two years he was heavily engaged on that case, AGC (formerly Asahi Glass) vs. Hoya, which is probably still one of Thailand’s biggest patent litigation cases.

Despite a busy professional life in the city, Manoon has retained both his love for sport and his love for the country; and somehow he’s managed to keep in touch with both.  He’s enthusiastic about trekking and has already been to both Everest and Annapurna Base Camps. Upper Mustang in Nepal, and the Routeburn Track in  New Zealand are on his list.  He also loves cycling and at weekends, when he is in Bangkok, often goes to Sky Lane, the 23.5 kilometre one-way cycle track that circles the airport and is popular with both locals and foreigners.  He enjoys getting out there on his bike among thousands of cycling enthusiasts: he finds it  a perfect break from the hustle and bustle of city life.

It is often said that people who grow up in the country never really leave it and that is true of Manoon.  He and his wife, who works in a Bangkok branch of the Bank of America, have a house in the country and go there as often as they can.   When there, they enjoy the tranquillity, being close to nature, gardening, and cycling through the countryside on their mountain bikes. Manoon is also able to indulge another of his passions: photography, particularly landscape photography.  When he talks about the thrill of looking through the viewfinder and capturing something really special, you feel like immediately heading outdoors with a camera.  Last year he selected photographs for New Year Cards sent to his clients, a different photograph for each client of which some examples are below.

Manoon and his wife dream of one day retiring to the country, but for now they are in the happy position of being able to enjoy the best of both worlds. 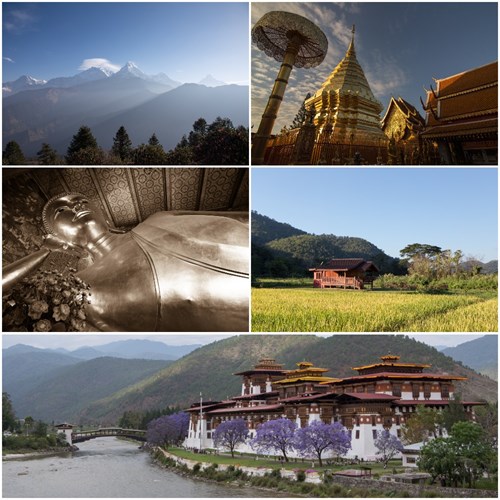