Thomas was Managing Partner of Swedish IP firm IPQ until its recent acquisition by Rouse.  He is now a Rouse Principal and Sweden Country Manager.

At the age of eight Thomas was running a thriving bicycle repair business from the family garage.  He was good at repairing bicycles and had seen a commercial opportunity.  Stories abound within the family about astonished customers realising that their bicycle repairer was a small gap-toothed boy.  Thirty years later, with his commercial instinct and entrepreneurial spirit still intact, but considerably developed, he founded a multi-disciplinary IP firm, IPQ, in Stockholm.  It’s been an interesting journey.

Thomas certainly wasn’t destined to be a lawyer.  He grew up in an engineering family and his father wanted him to be an engineer.  Seeing his son’s practical skills – which weren’t limited to bicycle repairs, but included an uncanny ability with IKEA assembly kits – he thought he had a natural aptitude.  Thomas, however, was never likely to follow a path that had been laid out for him by his father – he was much too individualistic for that!  There is a certain irony in the fact that he has ended up working in pretty much the same field as his father.  But more of that later!

Thomas’s early years were spent in Sweden, but he moved to Holland with his family when he was 11.  By that time, his father had trained as a Patent Attorney and was taking up a position with the EPO. Because they didn’t know how long they would be in The Hague, Thomas’s parents decided to send him to the American school on the basis that an education in the English language would stand him in good stead wherever they went next.  As it turned out, they moved to Munich after a few years and Thomas finished his schooling at the International School there, where classes were taught in both German and English.  This somewhat peripatetic existence has resulted in Thomas being fluent in Swedish, English and German.  For family reasons, he is also fluent in Estonian.

All four of Thomas’s grandparents escaped from Estonia during the Second World War when it was occupied by the Soviet Union.  Much has been written about the horrors of this period when 25% of the Estonian population either fled the country, or were killed or deported to camps in remote areas of the Soviet Union.  In Thomas’s family the Estonian heritage remains strong: growing up, he spoke Estonian with his parents and heard his grandparents talking of, one day, going back to Estonia to live - something that has never happened.

When he finished school in Munich, Thomas wasn’t at all sure what he wanted to do with his life – apart from, in the short term, travel the world.  That is what he did for the next two years, travelling far and wide and doing all sorts of work along the way to support himself – from work in an elderly care centre to work in a chocolate factory.  He learned a lot from all his various jobs, but perhaps most from his work in the chocolate factory.  There, he started work at 4.30 in the morning and was responsible for pouring the chocolate, which meant that if he was late, or got something wrong, there would be 30 people further down the assembly line without a job.  He says he thinks he learned more about efficiency and responsibility there than he would have done in a lifetime behind a desk.

While he looks back on this period as an invaluable learning experience, he acknowledges that, at the time, his parents were probably beginning to wonder if he was ever going to do anything useful with his life.  They didn’t put any pressure on him, or interfere in any way - as he puts it, they had always given him room to manoeuvre – but he knew they expected him to be educated, and after two years of travelling, he decided the time had come.  Much to his parents’ relief, and no doubt to their surprise, he chose to enrol in Law at the University of Stockholm. Even now, he’s not entirely sure himself why he chose Law, apart from the fact that it wasn’t Engineering, and that he remembered really liking debating at school and being told he was good at it and should become a lawyer. 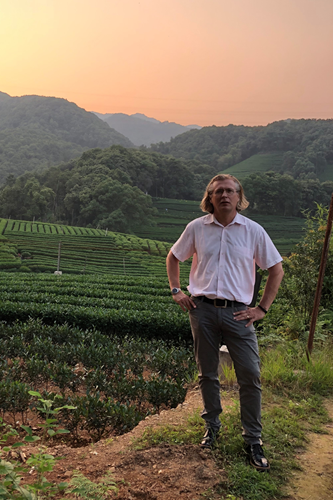 During his undergraduate degree he did a wide range of subjects and remembers, in one of them, coming across a passage that really puzzled him: it was a statement that computer software was not patentable.  This seemed illogical to him, even contradictory:  you could have patent protection for old technology, but not for new.  Typically, he started looking into the matter and ended up doing his undergraduate thesis on the patenting of computer software, which was a hot topic in the 90s and led directly to his first IP job, with IBM.

Strangely enough, it was really only at this point that he realised he had entered the very field his father had been involved in for years.  He had been one of the first Patent Examiners in the field of computer software patenting and ended up on the Board of Appeal at the EPO in Munich.   But because he never talked about his work at home, Thomas had never really focused on the detail of what he was doing.

Thomas ultimately moved from IBM and worked in private practice for the next few years, and here, one of the things that struck him early on was the difficulty Counsel had in assessing damages for IP infringement.  It seemed strange to him that they were not better qualified for the task and it led him to do an MBA at the Stockholm School of Economics where he learned the principles of valuing anything, any kind of property including Intellectual Property.

Years before, as part of his undergraduate degree, Thomas had taken part in an exchange programme and studied EC Law and an introduction to English law at the University of  Birmingham in England.  This turned out to be a more important step than he could have known at the time because he later met his future wife, Malin at the wedding of a friend he had met there.  She was an opera singer and performing in productions around Europe, so for the next few years they tried to ensure that, wherever possible, Thomas’s business trips and Malin’s singing schedule coincided. Now they have two sons, Florian aged 17 and Oliver 15, and Thomas is developing a much better understanding of the concerns his parent might have had when he was that age.

When Thomas started IPQ in 2004, everything he had learned along the way came together. He hadn’t followed the path his father laid out for him, but it had worked out perfectly.  His father not only took a great interest in the venture, but was able to provide invaluable assistance.  Probably unexpectedly, he found himself able to share his professional knowledge with his son, and enjoy a whole new area of communication.  It has been a fascinating, enriching and rewarding experience for both of them.