from Maths to Law – and then the world …

Tim is a London based Executive focusing on IP strategy and enforcement in China.  He returned to London recently after five years managing Rouse's Beijing office.

After he’d been practising Law for nearly five years, Tim decided to take a year off and travel the world with his wife.  They had a wondrous time, full of adventure and excitement – just what they’d been hoping for.  Then, when they got back to England, still full of the excitement of their wanderings, a friend asked: “So … you’ve had an amazing time!  What next?”  They answered simultaneously - but the words were different:  “China” said Tim.  “Children” said his wife.   As it’s turned out, they’ve managed both, but Tim’s answer was characteristic. He’s always been planning the next adventure.

He started out studying Maths, largely because he was naturally good at it, but also because he found it extraordinarily appealing: he loved its purity and clarity, and its beauty.  It just seemed a foregone conclusion that he would read Maths at university and that is what he did, at the University of Bristol.  Once there, however, he found he wasn’t particularly enamoured of his fellow Maths students; on the whole, they didn’t seem a very lively or interesting bunch.  So Tim tended to mix mostly with other students; he played rugby, grew his hair long, got involved in the music scene and generally enjoyed student life.

It wasn’t until he graduated that he started to think about the future, and it was by no means clear. His subjects at university had been broad – things like the philosophy of maths, general relativity, and fluid dynamics – without any particular career focus. So he took a year off to decide what he would do and it was during that year that he struck upon the idea of doing Law.  He enjoyed it from the beginning.   Intellectual Property was only a very small part of the course, but he remembers it vividly – he was immediately attracted to its abstract and technical nature and found the whole subject fascinating.

It was also during that year that he started to develop a passion for travel.  He had grown up in Nottingham, living what he now describes as a rather sheltered existence – at best, holidays involved camping trips to France, or Ireland or Scotland.  He had never been in a plane until he was nineteen.  So by the time he finished Law School he was ready for adventure and, before accepting the offer of a place at Ashurst, spent six months travelling in many countries including India, Nepal, Australia and New Zealand.

He went to Ashurst not because it had a great reputation as an IP firm, but simply because it was a highly regarded city firm.    Once there, however, he applied to qualify into IP litigation and worked happily in the IP team for several years until he and his wife had saved enough money to go travelling again.  That was a wonderful year, travelling through India, Thailand, Laos, Singapore and Japan, and spending time in Guatemala and the States.  Tim had originally met his wife, who is American, in Guatemala where she had cousins involved in the country’s recently revived jade mining industry.

When he returned from his travels, Tim was able to re-join Ashurst.  He was enormously grateful for the opportunity, but as soon as he sat back at his old desk he realised that something within him had changed.  Life in private practice wasn’t for him after all.  On his second day back, a friend walked into his office with an advertisement for a position at IFPI (the international trade body for the recording industry) and Tim was immediately interested.  Although he felt guilty at leaving the firm when it had been so good to him, he says that now, having had experience on the other side, as an employer, he sees that part of the satisfaction is to see staff develop and flourish in the best way possible for them – which means that sometimes they will stay with you, sometimes they won’t.

From mid 2004, to 2008, when he joined Rouse, Tim was IFPI’s Senior Legal Adviser, based in London, but managing litigation around the world.  Initially the issues involved physical pirating in places like Brazil and Russia, then after a few years, the focus shifted to online infringement. At that point, Tim was responsible for some of the high profile, ground breaking, copyright litigation that was happening around the world, and in one of the most important cases, a copyright infringement action against Yahoo! China, he was instructing Rouse. 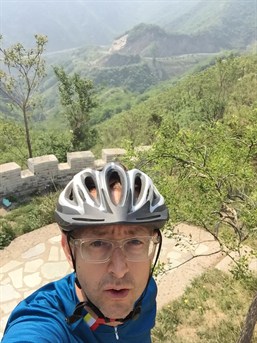 That’s where his relationship with Rouse really began. He got to know the firm well and liked what he saw.  He says it was natural that when, some time later, he began to feel that his role at IFPI wasn’t going to develop further, and that he needed a new challenge, he would think of Rouse.  He’d certainly never, until then, thought of returning to private practice, but Rouse seemed different.  It represented a third way – private practice, but with a decidedly commercial focus and non-hierarchical structure. He and his family have recently returned to London after five years in China, where Tim was managing Rouse's Beijing office.

So, Tim and his wife have managed both ‘China’ and ‘Children’; and living in China has been a hugely valuable experience for them all.  Their children began their education in China, and Tim’s particular hope is that it will have expanded their horizon and taught them to be curious - and to know that there is always ‘another way’.