It is, of course, notoriously difficult to provide accurate statistics on an industry that is founded on fraud and deception.

Why even bother?  Well, both the public and private sectors need reliable information on the wider impact of counterfeiting to be able to allocate scarce resources to dealing with the issue.  Without a decent understanding of the nature and extent of the problem, decisions are based on mere speculation.

In November 2015, we examined the European's Commission's report on EU Customs' seizures for 2014.  The OECD/EU IPO has now released a comprehensive analysis of more than 500,000 Customs seizures recorded globally between 2011 and 2013.  This is a significant report, as it's the first comprehensive global study since OECD's last report in 2008.

Researchers examined the WCO's dataset of global Customs seizures, complemented by data from the EU and US.  Customs seizures statistics present one of the better sources of data.  Despite only a fraction of consignments crossing borders being detained, the data is objective and fairly reliable.

The headline conclusions from the OECD/EUIPO report are: 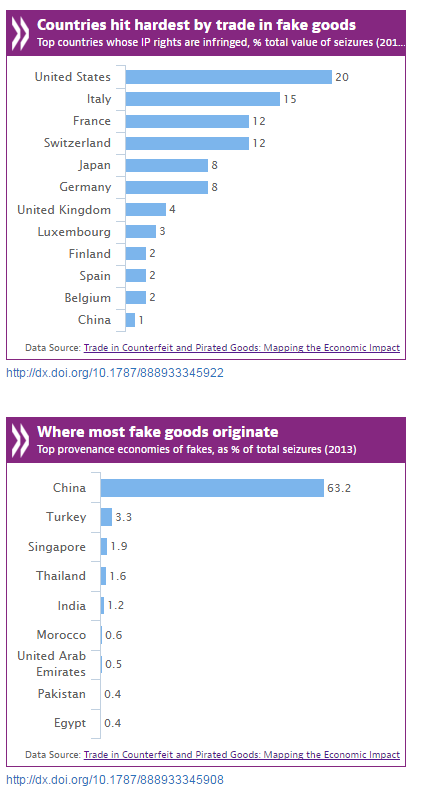 OECD Deputy Secretary-General Doug Frantz said, “The findings of this new report contradict the image that counterfeiters only hurt big companies and luxury goods manufacturers. They take advantage of our trust in trademarks and brand names to undermine economies and endanger lives.”