Best defence is offence: Arming yourself against Trade Mark Squatters in China

Trade mark squatters in China cleverly exploit the "first to file" vs "first to use" differences by registering international brands' trade marks in China, anticipating their entry into the Chinese market. When these targeted international brands enter China, squatters attempt to sell the registered marks back to the rightful owner for exorbitant sums to turn a profit.

Leading IP consulting firm Rouse and its network firm Lusheng Law Firm have won a milestone ruling in favour of its client Bayer Consumer Care Holdings LLC, a manufacturer of over-the-counter medication, dermatology and sun care products. Two cases, heard jointly before the Yuhang District Court in Zhejiang Province were ruled in favour of Bayer for trade mark non-infringement and unfair competition. The decision, handed down on 4 May 2018, marks a positive shift in the previously undefined area of unfair competition law and offers hope not just to Bayer, but to all foreign companies operating in China.

International brands and their trade marks in China

China has become a huge market for international consumer goods.  Many large international brands have established their own brick and mortar retail outlets, but even more foreign companies are reaching Chinese consumers through e-commerce platforms. China is by far the world's largest e-commerce market, with no less than 7% of total retail sales (approximately USD 200 billion) being made online.

One key legal challenge encountered by international brands during their entry into the Chinese market is trade mark protection. The problem can be summarised as follows:

Trade mark squatters in China cleverly exploit the "first to file" vs "first to use" differences by registering international brands' trade marks in China, anticipating their entry into the Chinese market. When these targeted international brands enter China, squatters attempt to sell the registered marks back to the rightful owner for exorbitant sums to turn a profit.

Another common scenario is that trade mark squatters will use the reputation of international brands to establish their own companies and generate profit by leveraging the original brand's value.

Though international brands have become better at understanding how to manage their trademark rights in China, many fail to anticipate local challenges arising from the aforementioned risks before entering the market. Even the most famous brands, such as Apple, Google and New Balance, have lost millions of dollars in protracted court battles against trade mark squatters.

An additional challenge exists for international brands who fall victim to trade mark squatters when entering the Chinese market. If another party has registered their trade mark, the foreign brand owner will face several distinct challenges when selling their products in China:

A recent case heard before the Yuhang District Court in Zhejiang Province involving Bayer Consumer Care is a prime example of the challenges presented by trade mark squatters for brand owners in China. The outcome however, marks a distinct shift in what is generally known to be near impossible. Bayer was successful in claiming that the trade mark squatter's malicious trade mark registration of Bayer marks and their pursuant malicious complaints amounted to unfair competition. The judgment handed down on 4 May, 2018 is a landmark decision and a big step forward for brand owners.

Bayer Consumer Care is a manufacturer of OTC medication, dermatology and sun care products, to name a few. One of their offerings is "Coppertone", a well-reputed sun care brand. In September 2016, Bayer discovered that their trade marks "Surfer Boy" and "Sun, Rainbow and Wave" had been the subject of a malicious trade mark registration by a Chinese individual, Li Qing. 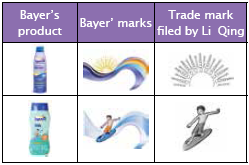 Upon acquisition of the trade mark rights, Li Qing filed a series of trade mark infringement complaints against Bayer's distributors and sub-distributors on Taobao, the e-commerce platform on which a substantial amount of Bayer's sun c a re products a re sold. Subsequently, they made complaints to various AICs in different cities against Bayer's distributors. Of course, what underpinned these actions by Li Qing was the intent to sell the trade marks to Bayer at a heavily inflated price.

Bayer, advised by Rouse and network firm Lusheng, strategized overall legal remedies to protect its brand. This included issuing letters to Li Qing requesting that the complaints cease, opposing Li Qing's complaints and filing actions to invalidate Li Qing's trade marks. Most significantly, Bayer filed non-infringement litigation and unfair competition suits against Li Qing which shifted Bayer from a defensive to an offensive position. By initiating the non-infringement litigation, Bayer petitioned the court that its sales of subject products did not infringe Li Qing's trade marks due to its prior copyrights on the products' designs and prior use in China . With respect to the unfair competition litigation, Bayer was able to claim economic loss and effectively deter malicious trade mark squatters and complaints.

The complexities Bayer and its IP consultants were faced with during the litigation exceeded the standard scope of issues encountered by litigants in China. These can be summarised as follows:

Chinese courts have largely followed a strict interpretation of the law. There are no legal rules or regulations clearly defining trade mark "squatting" or malicious trade mark infringement, which means there is no clear forum for a complaint by an aggrieved party. Nor are there constitutive requirements or resultant legal effects of such activities. This environment has led to court judgments largely in favour of trade mark squatters.

Principle of Honesty and Good Faith

Given the challenges presented in facing trade mark squatters in China, Bayer's legal representation took a more lateral approach, turning to the Principle of Honesty and Good Faith. This was an ambitious endeavour due to the abstract nature and lack of concrete legal elements involved.

Bayer and its legal representation successfully established the steps and methods of "materialisation" of Principle of Honesty and Good Faith. In order to satisfy these, Bayer submitted precedent judgments, administrative decisions, government forums and Supreme Court's minutes. Below is a brief illustration of major elements in the materialisation: 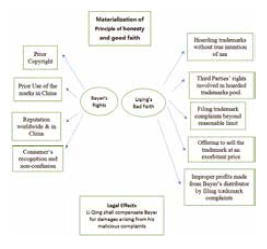 The court found that Bayer owned prior copyrights to both the "Sun, Rainbow and Wave" and "Surfer Boy" marks. Consequently, the court held that the Coppertone products using the two designs did not infringe Li Qing's registered trade marks.

1.The court found that Li Qing registered Bayer's trade marks maliciously, as they were not intended for use in business operations or IPR protection. Li Qing's intent was to profit by filing complaints against the subject Coppertone products. The court held that such activities damaged Bayer's commercial advantage and led to the direct competitive relationship between Li Qing and Bayer.

2.Further, the court found that Li Qing was clearly aware of Bayer's prior rights on the subject designs and prior use of the designs on the Coppertone products. Taking this into consideration, the court held that the trade mark registration was indeed malicious.

3.Finally, the court found that Li Qing profited from filing complaints against the subject Coppertone products, anticipated selling the marks to Bayer and was ‘piggybacking' on Bayer's prominent business reputation. Further, the acquisition and application of registered trade mark rights by infringing the other party's prior rights was found to be contrary to the principle of honesty and credit upheld by the court. As such, the court held that Li Qing's intent was to disrupt fair market competition.

The court held that all activities undertaken by Li Qing constituted unfair competition pursuant to Article 2 of the Anti-Unfair Competition Law, which states that "a business operator shall, in his market transactions, follow the principles of voluntariness, equality, fairness, honesty and good faith and observe the generally recognized business ethics."

The court's decision to recognise "malicious trade mark registration" and "malicious complaints" as amounting to unfair competition is precedent-setting in China. The judgment is highly valuable for both Bayer and rights holders alike.

Whilst the practice of malicious trade mark registrations has become increasingly common in China, the Bayer decision will no doubt act as a significant deterrent to potential trade mark abusers, increasing the ability of courts to take effective action, along with the size of applicable fines.

Jacob Chen at Rouse, commented: "This is a landmark ruling for Bayer and other rights-holders alike. Perhaps most significantly, it sends a clear message to other ‘trade mark snatchers' who look to wrongly benefit from well-established brands. Malicious trade mark registrations had become a serious problem in China, so this represents a significant step in the right direction in terms of intellectual property protection. "

Miriam Yang & Guo Tai - the attorneys leading the litigations at Lusheng Law Firm, commented: "In light of this pleasing result, it is now clear that China is taking strong action in this area and that with effective support and advice, brands operating in the country can be confident that protecting their intellectual property is very much possible. The milestone ruling shows that Chinese Courts are making efforts to reach a balance between fast-changing market and stable judicial practice. It also shows that Taobao, the leading e-commence platform in China owned by Alibaba Group, respects intellectual property rights and provides reliable IP protection for operators in good faith."

Our advice to rights holders

Brands anticipating expansion into China should apply for trade mark registration at the earliest opportunity. Just as pertinent is investing in obtaining the right wording and figures for filing. This can be done by using a strategic combination of literal translation, phonetic transliteration, descriptive adaptations and significant figures. Companies should also acquaint themselves with the various legal tools to protect their trade mark rights, including trade mark invalidation actions, opposition to complaints, non-infringement and unfair competition litigation and negotiation and settlement. And finally, enlist in the services of professionals who truly understand the landscape for strategic advice on China market entry well before any issues can arise.

This article was first published in China IP Magazine in October 2018.

If you have any questions, please contact the authors Miriam Yang and Megan Hoare.