What is being developed to reduce, stop or sequester the main greenhouse gases.

In this article we look at some of the key technologies that are being developed to reduce, stop or sequester the main greenhouse gases contributing to climate change.

The technological and innovative solutions to new manufacturing processes and transportation developed since the beginning of the Industrial Revolution in the 18th century have had a transformational and beneficial economic and social impact on human society. However, as society has permanently moved away from an agrarian lifestyle in its embrace of an industrially dominated one, it transitioned with little or no regard to the negative impact such a monumental change would have on the environment – until now!

150 years after the Industrial Revolution began the negative impact that increased industrialization (i.e. energy production, manufacturing and transportation) has had on the environment around the world is finally becoming realised. In addition to the degradation and pollution of the oceans and the earth, there has also been a steady increase in the emissions of greenhouse gases (GHGs) into the atmosphere which stops (traps) heat from escaping, leading to global warming. Since 1880 the average global temperature has increased by nearly 1° Celsius, the majority of which has occurred in the last 40 years.

Global warming and climate change now affects all regions around the world and is now one of the most complex and pressing issues facing the world today. If left unchecked global warming will continue to melt the ice shields, raising the level of the sea, as well as propagate extreme weather events (with more rainfall in some areas and heat waves and droughts in others).

Clean technological innovations and solutions that help us meet our energy demands, improve our manufacturing processes and solve our transportation needs in a cost effective and socially responsible manner are required if we want to mitigate, as well as adapt to, climate change.  Intellectual property protection has the potential to spur the innovation needed to encourage the development and creation of climate mitigation solution orientated technologies.

In this article we look at some of the key technologies that are being developed to reduce, stop or sequester the main greenhouse gases contributing to climate change.  But first, let’s take steps to better understand what the main types of CHGs are and where they originate from.

Introduction to the four main greenhouse gases damaging the planet

The four main greenhouse gases that we are going to discuss in this article (in order of their impact on global warming) are carbon dioxide (CO2), methane (CH4), nitrous oxide(N2O) and fluorinated gases. 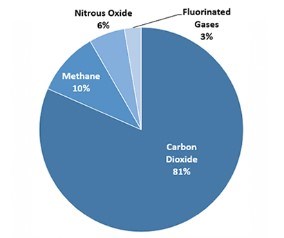 All of these gases remain in the atmosphere long enough to become well mixed, meaning that the amount that is measured in the atmosphere is roughly the same all over the world, regardless of the source of the emissions.

Technology to the rescue?

Although carbon dioxide (CO2) is naturally present in the atmosphere as part of the Earth’s carbon cycle, human-related emissions since the Industrial Revolution (primarily from the burning of fossil fuels - 80 per cent of global energy comes from coal, natural gas, and oil, solid waste, trees and wood products, etc.) and deforestation (which reduces the amount of carbon dioxide removed from the atmosphere (or "sequestered") when it is absorbed by plants as part of the biological carbon cycle) have rapidly increased its concentration in the atmosphere by more than a third.  Energy production and transportation are responsible for more than half of all CO2 emissions.

Whereas most agree that renewable energy (energy that is derived from natural sources such as wind and air) is the future of power generation, stop-gap process and control technologies continue to be developed to reduce the level of CO2 emissions generated from the burning of existing fossil fuels, and increasingly, biomass. These include:

Whereas transitioning away from fossil fuels is likely to be a long process (as fossil fuels continue to provide reliable, accessible and relatively inexpensive energy) advances in technology and public opinion is leading to rapid change. The main sources of sustainable and renewable energy that are being developed to produce electric (as well as heating and cooling services) include:

A number of these sustainable and renewable energy technologies and processes are being deployed alongside traditional power plants to reduce and supplement the amount of fossil fuels required.

Capturing carbon and putting it to other uses

In addition to technologies that seek to limit or stop the emission of CO2 into the atmosphere, technologies are being developed for carbon capture and storage (CCS) purposes. These technologies seek to remove excess CO2 in the atmosphere as well convert it into useful by-products.  These include:

Other future CCS technologies include:

Methane is emitted during the production and transport of coal, natural gas, and oil. Large amounts of ethane emissions also result from livestock and other agricultural practices (especially rice cultivation) and by the decay of organic waste in solid waste landfills.

Methane's lifetime in the atmosphere is much shorter than carbon dioxide (CO2), but CH4 is more efficient at trapping radiation than CO2.

Reducing methane output and putting it to good use

In the farming and agricultural sector:

Development of new animal feed: Noting that animals (primarily cows) are responsible for 44 percent of all human-caused methane (and is the third largest contributor to global emissions by sector), greater steps are being taken to study and redesign the diet of cows to reduce the production of methane. For example, findings show that feeding seaweed (marine algae) to cows can reduce methane emissions from cattle gut microbes by as much as 99 per cent.

Converting methane into fuel: Effluent and wastewater from farms (as well as palm oil mills), for example, are collected in covered ponds which generate methane that can be captured and burnt to produce electricity.

Composting: used as an alternative to landfill as it reduces methane production, as well as provides a series of economic and environmental co-benefits such as less need for fertilizer, water, herbicide and pesticides, and the reduction of soil erosion.

Topsoil: Biosolids are used to create a special topsoil to cover decommissioned landfills. ‘This topsoil contains microorganisms that convert methane into carbon dioxide, a much less potent greenhouse gas. This can reduce greenhouse gas emissions from landfills by as much as 95%.’

Nitrous oxide is a potent greenhouse gas and ozone-layer depleting compound emitted during agricultural and soil cultivation practices (use of commercial and organic fertilizers) as well as industrial activities (gases used for refrigeration and industrial processes), as well as during combustion of fossil fuels and solid waste. Agricultural operations in which nitrogen fertilizers are used on pastures and crops account for 60% of N2O emissions. N2O is 300 times more powerful than CO2.

Most plans to reduce excess nitrous oxide into the environment involves the development of well-constructed nutrient management plans. The correct use of fertilizers and irrigation, for example, can reduce or eliminate excess soil nitrate, and are the best methods for reducing the amount of nitrous oxide emissions released into the atmosphere from agriculturally managed soils.

An innovative strategy for capturing nitrous oxide levels is the solar chimney power plant (SCPP) an electricity-producing system that can decompose nitrous oxide from the atmosphere into nitrogen and oxygen with reactive glass.

Fluorinated gases (F-gases), such as hydrofluorocarbons, perfluorocarbons, sulfur hexafluoride, and nitrogen trifluoride, have no natural sources, only come from human-related activities and are emitted from a variety of industrial processes.

These synthetic gases are emitted in smaller quantities, but because they are potent greenhouse gases, they are sometimes referred to as High Global Warming Potential gases, as their global warming effect is up to 23 000 times greater than carbon dioxide.

Most F-gases are now regulated in production and release to their atmosphere by international agreements.

From transportation to enhanced manufacturing, technology has played its part in climate change. But, technology can also change the course we're on if it's harnessed in effective ways.  But bringing new energy technologies to market is not a simple task.  The time, cost and complexity of developing new ways of harnessing, distributing and consuming large-scale, reliable, affordable, and carbon-free energy means that a switch from fossil fuels to other types of sustainable, renewable and/or low-carbon energy will take time.

Systematic, long-term policies and regulations that promote the development and deployment of innovative technologies will be fundamental to combatting global warming. Intellectual Property Rights (IPRs) are one of the many tools that, if correctly deployed by governments, can encourage and spur the development, transfer and allocation of climate change mitigation technologies to where they are most needed.