Various factors have led to these changes:

The only way to obtain the exclusive right to a GI in Russia is through registration with the Federal Executive Authority for Intellectual Property (Rospatent).

There are no specific criteria listed in the law setting out the requirements for a valid GI (as there are for trade marks). Instead the law sets out the general characteristics of a GI, which include:

It should have become known as a result of its use in relation to a specific product, the properties of which are exclusively or mainly determined by geographical conditions or the activities of people in a specific locality

Specific requirements for production, quality, etc, must be set out in Federal Laws or Regulations.Legal protection as a geographical indication cannot be granted to a designation previously registered as an AO for a product of the same type, and vice versa.

There are no limitations in the law on the types of products which can be covered by a GI, so applications will be possible for products outside agriculture such as handicrafts.

Once registered, the GI will be a right to be considered when trade mark applications are assessed, and similarly can be used as the basis for cancellation actions. According to the law, applications which are the same as, or confusingly similar to, a GI (or AO) cannot be registered as trade marks in relation to any goods. There is an exception to this, however, whereby a GI proprietor can include the GI as an element of a trade mark for the same goods with a disclaimer.

Enforcement of GIs will be possible against third parties using marks which are the same or confusingly similar in respect of the same or similar goods. This extends to translations of the GI (e.g. a third party using the Cyrillic version of a GI registered in Latin, and vice versa) and where the GI is used in combination with words such as “type”, “imitation” or “similar”. But enforcement will only be possible through the civil courts – there will be no remedies available through administrative or criminal means.

Clearly, the new law creates new opportunities, particularly for foreign holders of GIs. However, there are several restrictions obtaining GIs. The most relevant of these for many foreign GI holders concerns designations which are already well-known in Russia without that notoriety being associated with its initial geographical provenance. Thus, a designation that has become universally used in Russia as a designation of a certain kind of product not related to the place of its production will not be recognized as a GI. Examples of this are the Cyrillic versions of “Cognac”, “Champagne” and “Scotch”. It is possible, however, that the Latin versions of such GIs will be registrable. Each will depend on its particular facts.

The special logo for identification of GI was developed by Rospatent and chosen by voting with the participation of the public, business, intellectual property specialists. 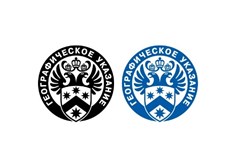 The logo successfully passed the heraldic examination and was approved by the Heraldic Council under the President of the Russian Federation.

Over the coming months, we will see how many brands take up this new means of protection. For any questions, please contact the author.